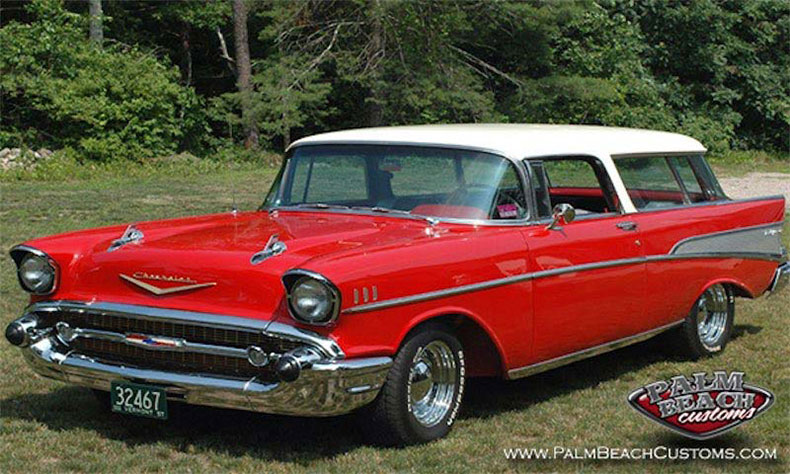 There is no doubt that the Tri-Five Chevrolet is the most iconic American car. 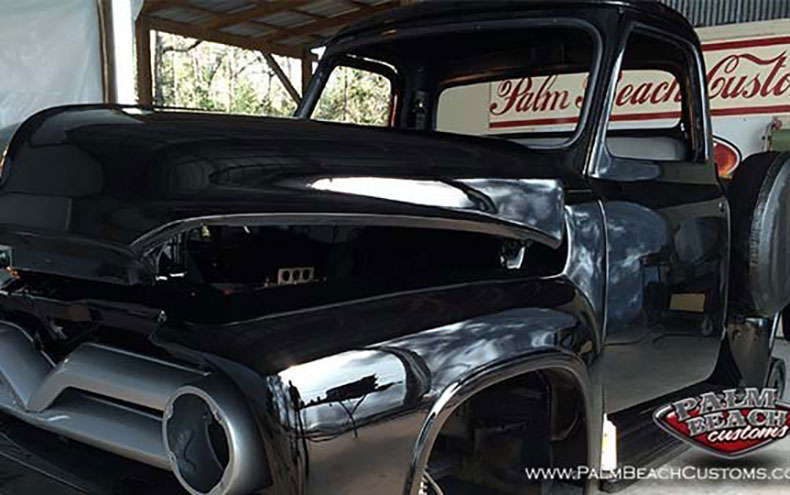 It has long the favorite with the hot rod and collector crowd and John Russo at Palm Beach Custom’s first car was a ’57 Chevy (learn more about us here).

This classic car has recently attained automotive immortality status. How do we know? 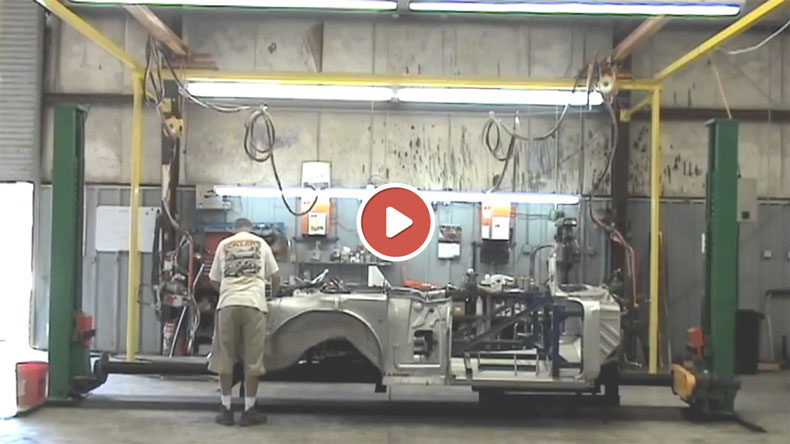 For a little over $180,000, you can buy new 1957 Bel Air 2-Door Sedan, Hardtop, or Convertible assembled from GM licensed reproduction steel bodies and parts. We’re building them at Palm Beach Customs in Florida at our shop – see our Tri-Five Chevy Build Here if you’re curious. 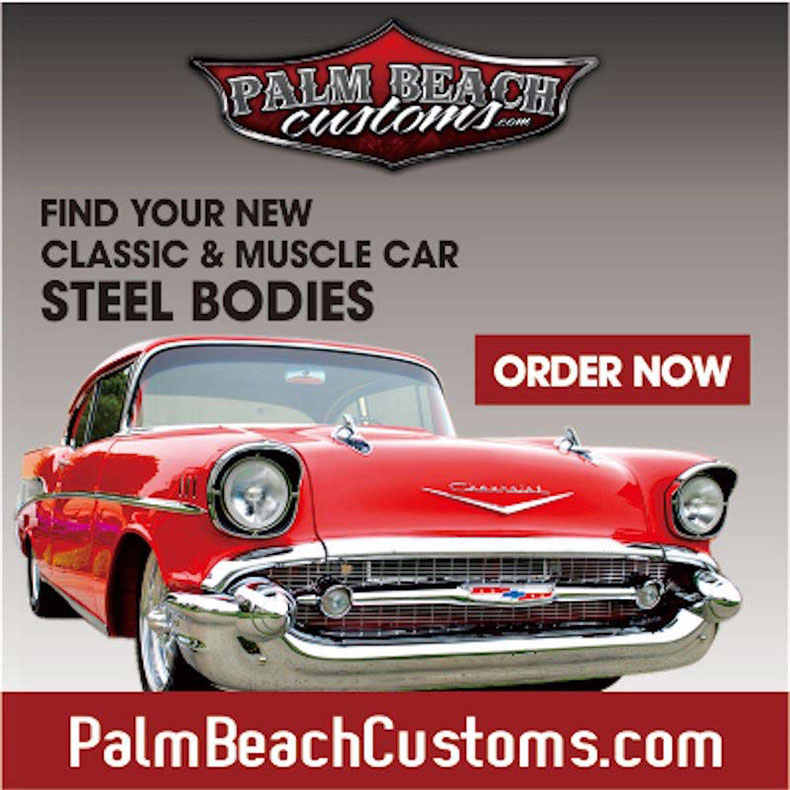 The history behind the ’57 Chevy (and its ’55 – ’56 predecessors) really cool (we think) and worth know if you’re interested in these American icons.

Beginning with the 1955 Chevy

The ’55 Chevy model was completely new in every way when it was first introduced to the public. Especially if you think about the soon-to-be legendary small-block V8 engine it came with.

The ’55 – ’57 was surprisingly compact, especially compared to its successors in later years. At 196 inches long and 72 inches wide and weighing in at a light 3150lbs this size car was what many Americans at the time (and today) prefer.

With the Chevy’s upright-style seating, there was room for about 6 people. Unfortunately, by today’s standards, the 1955 Chevy might seem a bit small for 6 people.

This balanced package of size, weight, and dimensions paired with good performance, efficiency, and easy handling was never again replicated. The Big Three (Ford, Chevy, and Chrysler) were determined to churn out lower, longer, wider, and heavier models. 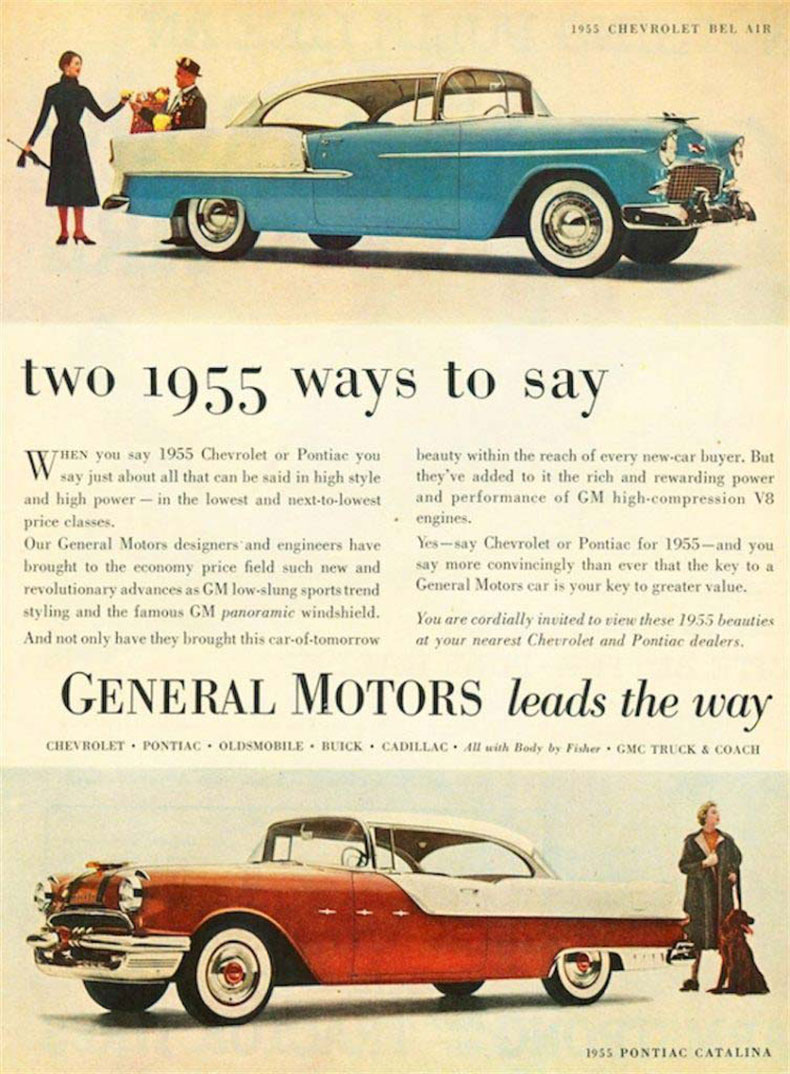 Chevy’s all-new small-block V8 is an important player in the Tri-Five Chevy history. It was the most advanced American engine produced during this time due to the compact size, light weight (from new thin-wall casting techniques), and its efficient cylinder head design.

This Chevy small block engine became the most produced engine in history – over 90 million! In 1955, in the ’55 Chevy, its lively performance, smoothness, and efficiency were appreciated at the start. 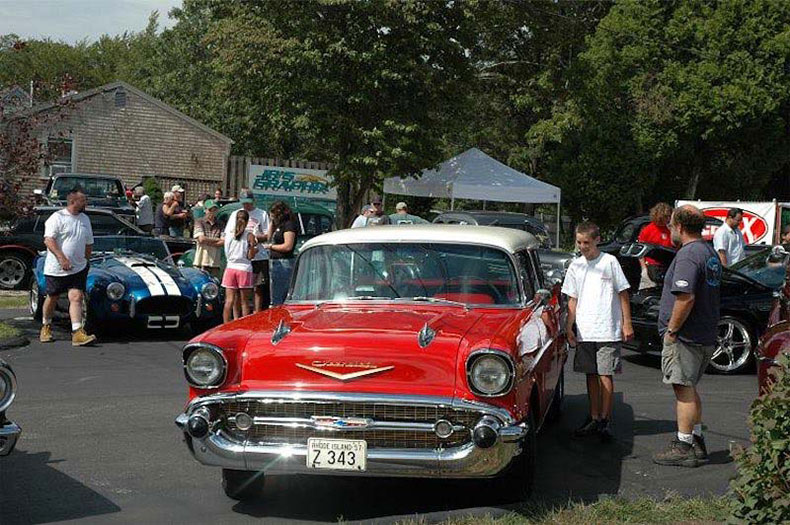 Further, compared to the competition produced by Ford and Chrysler, the ‘55 Chevy just looked clean, sophisticated and upscale. Sales jumped almost 50% and eager buyers got their hands on 1.7 million of these cars.

By 1957, the small block V8 grew to 283 cubic inches. The fuel-injected version cranked-out up to 283 horsepower. With a power-to-weight ratio comparable to today’s WRX, these cars hauled ass to say it simply! 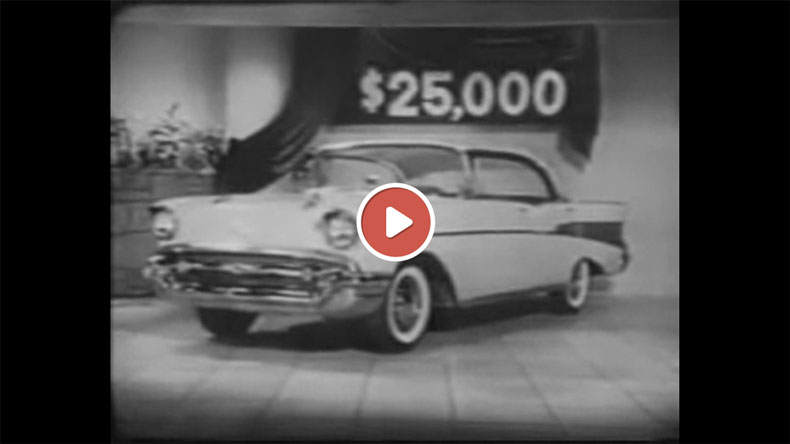 The tri-five Chevy quickly replaced the ’32 Ford and the flathead V8 as the iconic generational car and the hot-rod legend was born.

The Race Between Ford, Chevy, and Chrysler – the end of the Tri-Five Chevy Era

Ford and Chrysler were determined to beat GM and they rolled out completely different cars that were longer-lower-wider 1957 models. Because the Chevy had been all-new in 1955, GM decided to simply tack on a face-lift to the 55-56 Chevy. But no one was fooled that this was a new car, the ’57 Chevy was just a ’56 that sported fins.

However, this inability to beat Ford and Chrysler became a critical step to the eventual beatification of the ’57 Chevy.

Sure enough, the Chevrolet got clobbered as Ford went for the gold for the first time since 1929.

But the all-new Fords, and the “Suddenly it’s 1960” 1957 Plymouths and Dodges were horribly built. Doors sagged, windows didn’t seal, and water leaks were characteristic – especially in the Chrysler models.

Meanwhile, the little Chevy, now in its third year of production remained as solid as a brick house. 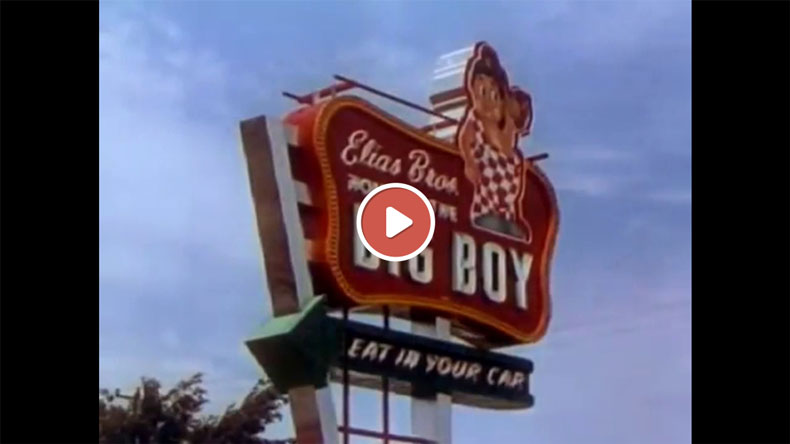 The huge Chrysler cars drove GM to replace their all-new ’58 models with the batwing look.

The race between the Big Three to build oversized vehicles resulted in cars that were no match in quality compared to the tri-five Chevys.

Soon, the newly winged land-yachts were being avoided by customers looking for a quality vehicle. Used tri-five Chevys were suddenly prized for their quality, trim size, and good handling.

It’s surprising that Chevrolet has yet to bring back the set of classic ingredients that made the Tri-Five Chevys winners to this day.