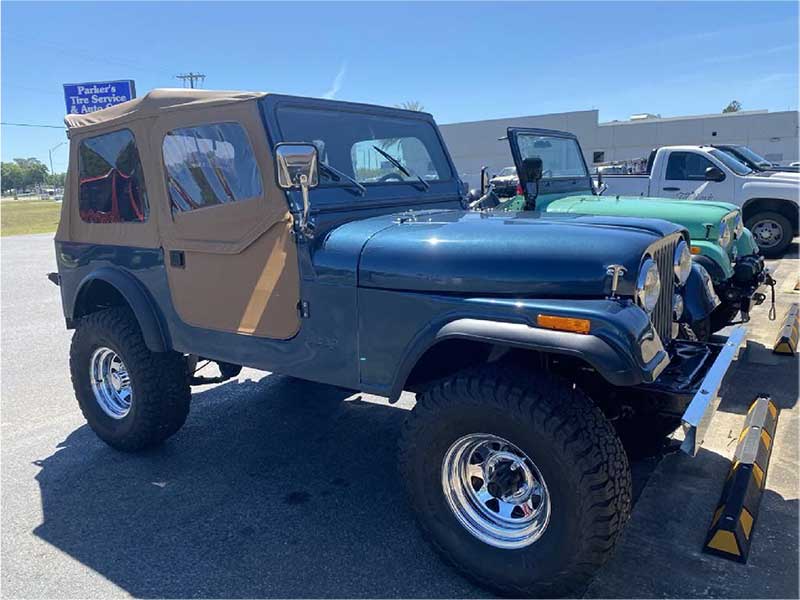 Do you know what’s Vehicle Identification Number (VIN)? The VIN is unique for any specific vehicle, and it is a powerful source of information that shows vehicles’ unique features, specifications, and manufacturer. And the knowledge of decoding Jeep CJ VIN Numbers 1971-1986 will give you unlimited access to those important pieces of information.

People usually underestimate information that looks abstract and too technical, especially if presented in the form of a long line of numbers and letters like the VIN number.

When we’re buying a Jeep, the most important thing for us is its condition and the account number that tells us how much money we should pay for it. But as soon as we get into the administrative part of the deal, many other numbers appear to be important, and knowing them is an inevitable part of owning a Jeep.

VIN number is the most significant one. Without it, you can not register your Jeep or finish any other administrative work, bring it into a workshop for a repair, or sell it.

You must also know how to check if the number from the documents is the same as the one on the car’s frame. Wrong or fake VIN can lead to serious legislative procedures and issues.

Most people don’t know what a VIN number is, and others have no answer to most questions, like, why do we need it, what does it mean, where can we read it,  is there another vehicle with the same number, etc.

That’s why, before we make the decoding Jeep CJ VIN numbers 1971-1986, we will explain some basics of the VIN number.

What is the VIN Number?

VIN number is a unique identifying code that can be found on any produced vehicle. Sometimes it is also called ‘chassis number’ or ‘frame number.’ There are no two vehicles with the same VIN, and by tracking this number, you can follow any activity related to the vehicle.

The automotive industry started using it in 1954. Before, they used the engine number for the same purpose, but problems occurred with replaced engines, and the changes were inevitable.

But the VIN number was not standardized until 1981 when today’s 17 characters format was introduced for all different vehicles.

But before the decoding, let’s briefly overview when we need a VIN number.

When Do You Need a VIN Number?

There are some situations where knowing the Jeep’s VIN number is essential, like:

Inspecting the Jeep’s condition in the workshop is only one part of the story when buying or selling a used vehicle. You have to know the Jeep’s VIN number to get many other valuable pieces of information like maintenance history, specific vehicle accidents, product recalls, airbag deployment, history of vehicle owners, current lines, and possible “lemon” status.

Whether you are buying or selling, you have to ask and present this information. Proper decoding Jeep CJ VIN numbers 1971-1986 will be essential for a relaxed and successful negotiation process.

But first, we have to locate it.

You can find the VIN number in the registration card, insurance card, and other similar ones. It’s important to know how to find this number on your Jeep, so you can see if it is the same number as the one on your documents.

The wrong or fake VIN numbers in your documents can be an unpleasant situation. Even in the best-case scenario, if there were no frauds, steals, and similar legal irregularities, resolving the problem and changing the VIN in the documents will be frustrating and time and money consuming.

VIN numbers are usually placed on a tin plate located in different places on your Jeep:

Also, an abbreviated version can be found on the top of the passenger side frame rail above the rear wheel.

Now that we know what the VIN number is, when it is needed, and where to find it, it’s time for decoding Jeep CJ VIN numbers 1971-1986.

Furthermore, the period between 1971 and 1981 is before VIN’s 17 character standardization, when VIN had only 13 characters.

Decoding Jeep VIN number 1971-1986 has 3 variants, and we will present them in 3 consecutive tables. 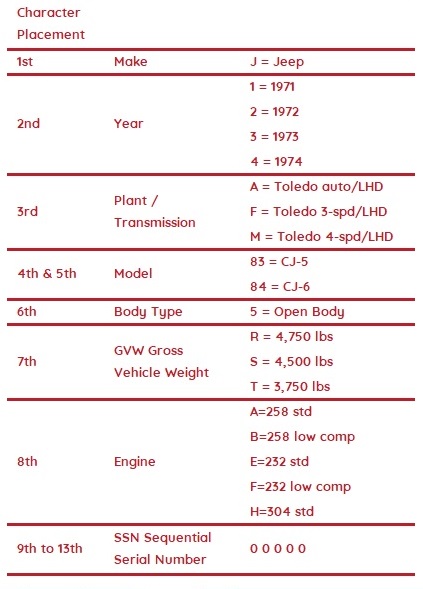 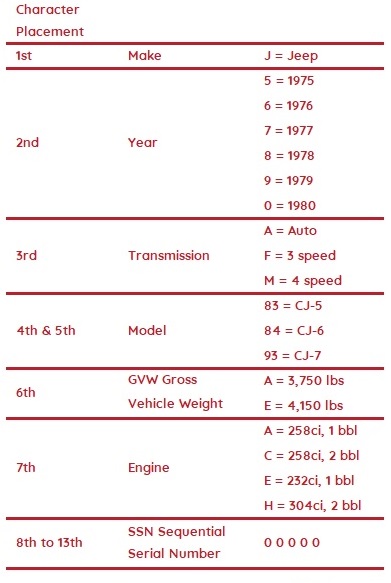 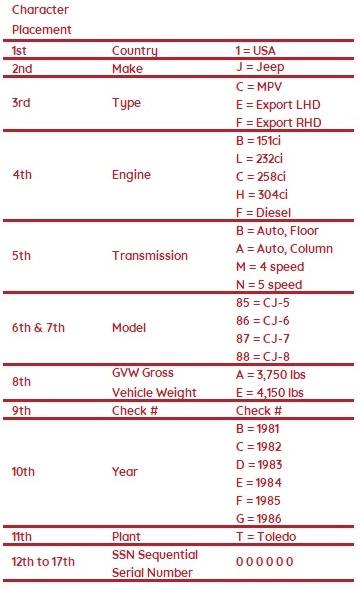 These are the 3 options for decoding Jeep CJ VIN numbers 1971-1986 depending on the year of production. Using them, you can successfully decode your VIN and take the needed information from it.

From the moment when you are looking to buy one, through all administrative procedures, workshop visits, to the moment of selling or restoration, you need correct VIN number information. Decoding Jeep CJ VIN numbers 1971-1986 is an important part of extracting information about your vehicle. We wanted to provide help to everyone who needed knowledge about decoding Jeep CJ VIN numbers 1971-1986.

The Jeep CJ-7 featured a wheelbase 10 inches longer than that of the CJ-5 and lacked its trademark rear curve of the door cutouts. The other main difference to the CJ-5 was to the chassis which hitherto consisted of two parallel longitudinal main c-section rails. To help improve vehicle handling and stability, the rear section of the chassis stepped out to allow the road springs and dampers to be mounted closer to the outside of the body. It was introduced in 1976, and 379,299 were built during 11 years of production.

The CJ-7 featured an optional new automatic all-wheel-drive system called Quadra-Trac, as well as a part-time two-speed transfer case; an automatic transmission was also an option. Other features included an optional molded hardtop and steel doors. The CJ-7 was also available in Renegade and an upgraded Laredo model. Noticeable by their different body decals, the Laredo model featured highback leather bucket seats, a tilting steering wheel, and an elaborate chrome package that included the bumpers, front grille, and mirrors. An optional Trak-Lok differential was available for the rear. The rear-axle ratio typically 3.54, but later went up to 2.73.

During its 11 years, the CJ-7 had various equipment packages:

A diesel-powered version was made in the Ohio factory for export only. The engines were provided by General Motors, the owners of Isuzu Motor Cars. Production of this diesel version was between 1980 and 1982. This model had the Isuzu C240 engine, T176 transmission, Dana 300 transfer case although there are reports of some being produced with the Dana 20. Typically, they had 4.1 ratio, narrow track axles.

The CJ-7 continues to be used in the sport of mud racing, with either the stock body or a fiberglass replica. It is also a favorite for rock crawling.

We, at Palm Beach Customs, are devoted to Jeep CJ restorations. Since 1980 we have completed over 2100 restorations across the US, and we know that every detail is important.

If you need any additional information, do not hesitate to contact us. Our team of restoration specialists will be happy to share the knowledge and experience with you.