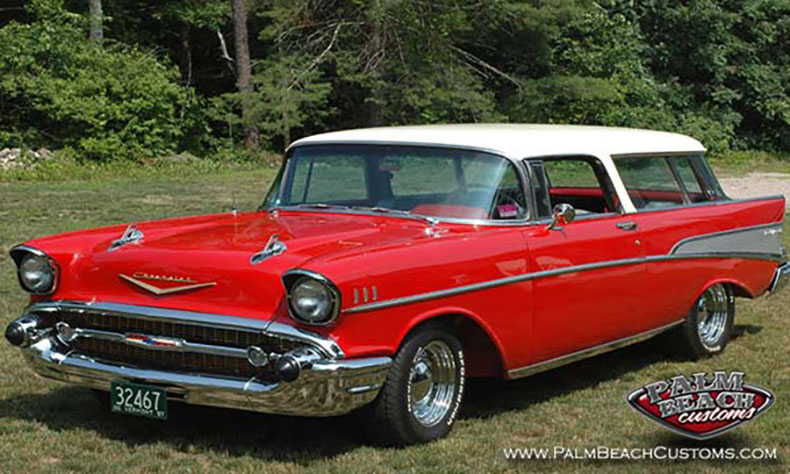 Restoring Classic Cars in Florida just like the 1957 Chevrolet Nomad V8 is a frightening venture.

So hold on to your seats Grab the wheel ant hit the gas here we go ! 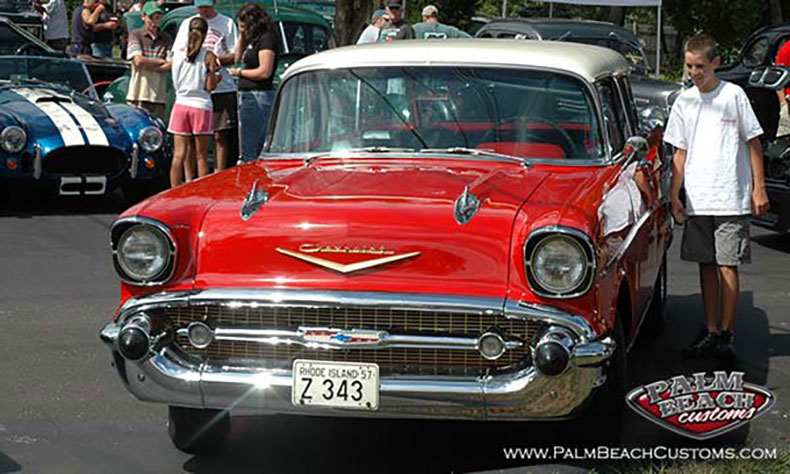 After we acquired this 1957 Chevrolet Nomad challenge.

It was a practically rust-free body it turns out I drove a 1940 Chevy to Hershey Pa. While at the biggest vehicle show in the northeast.

I was equipped to drive my 1940 Chevy into the exhibit and park next to my associates Narragansett wiring.

Even as minding my own business and happy with my 40 Chevy out of the acres and acres of basic cars and constituents someone left a notice on my vehicle and acknowledged they had a 1957 Chevrolet Nomad wagon and wanted to trade me even Steven ..

Wow I was a TRI Five nut! I checked out the car with to of my best friends Willie Barber and Paul Edwards we talked.

We Looked over the 57 nomads waited 10 seconds and made the deal!

We were in Heaven the car made history as we were growing up taking it on road trips and piling the people in ( all while still looking good ) as we were off to our next destination.

Being in the vehicle auto Restoration trade in full swing at the moment together with a Sandblasting industry we’d strip classic and muscle automobiles to bare metal.

Blast MEDIA is made out of metallic so it actually cleans ready for PPG dp 90 Epoxy etch as soon as you finish blasting.

The car had never been apart.

Dp -ninety epoxy and PPG’s Urethane polyurethane PPG version of DuPont Imron rebuilt the original 1957 v8 283 block together with a contemporary faster -400 Turbo much better that the 2 speed power glide and a brand spanking new suspension..

All door gaps had been excellent as well as hanging the nose.

Was once a 2500 man-hour mission no longer for the vulnerable and weak minded This specified vehicle meant alot to me in view that my fine buddy Paul Edwards .

To be Working with Me on the restoration

Paul was 5 years older them me and we truly met considering of the love for the Tri five Chevy’s..

We sent out all of the Chrome for a Tri stage re-plating, copper, nickel, then chrome to be handled through Joe Perry from RI technical Plating.. we use to kid him and say we only want to here Aerosmith playing ( Joe was the lead guitarist )

They do ideal work and had re chromed dozen’s of bumpers and cool car parts for me prior to now..

Good  pal ‘Frank Hawker ‘ a concourse judge within the classic automobile enterprise informed via the famous Johnny Lema used his masterful hands to install all the upholstery.. to perfection !

I might ad He started his career In Southern California. He was trained by the best Upholstery Restoration experts .

I had the privilege to restore his wife’s 1965 mustang convertible and it was a secret that we had to keep. Why? You might ask well her Dad was in the nursing home and It was originally Dads car and all she wanted to do was take her dad Cruising the back roads with the top down we made that dream come true for her .

Cant beat that with a stick..

So Check it out and share with your Friends & neighbors!

Base Ball- Apple Pie & Chevrolet made in the USA 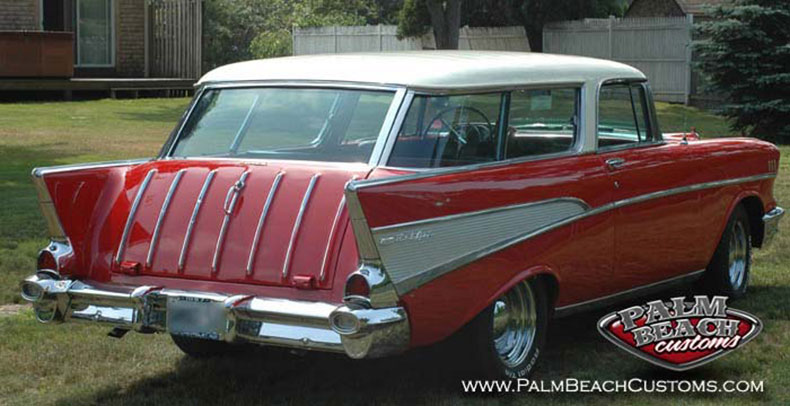 The Featured Car in the R.I.Providence Journal because the newspaper clip states this was a “like new restoration”,  the Nomad seemed as if it is the perfect example ! 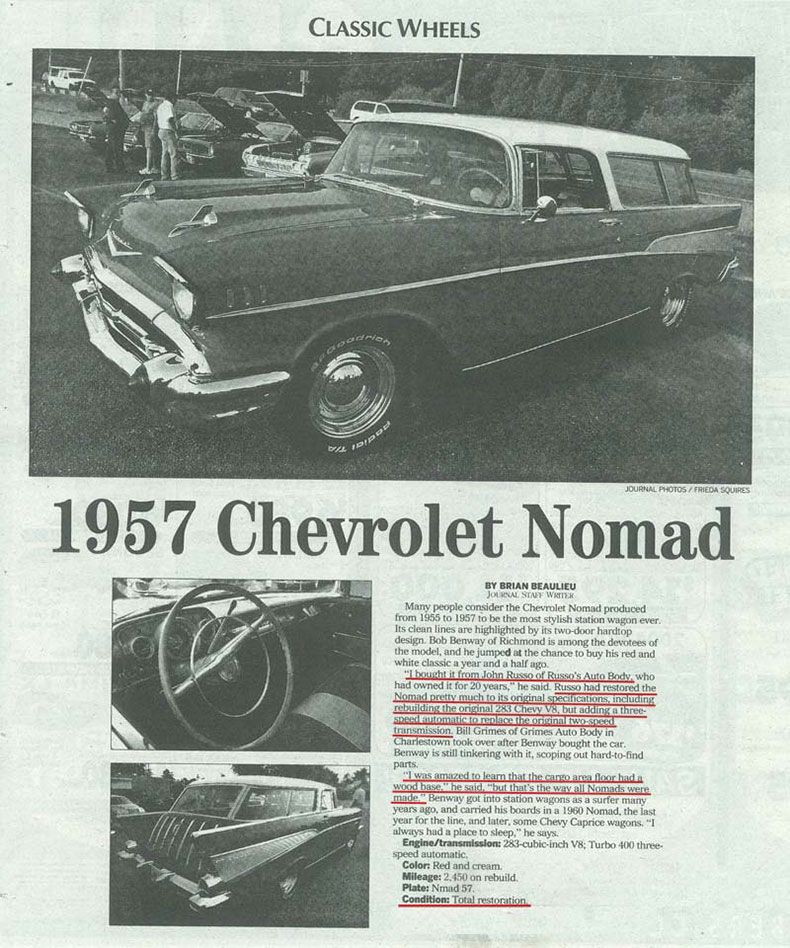 Chevrolet’s V-eight units continued turning up the heat as the ’50s rolled on. In 1957, the enormous news underneath the hood integrated a displacement broaden because the 265 was once bored out to 283 cubic inches. A 162-horse 265 V-8 remained available that yr, however much more popular was the brand new 283, which began at 185 horsepower with a two-barrel carburetor and single exhaust. Buying and selling the 2-barrel for a 4-barrel, including dual exhausts and boosting compression from eight.5:1 to 9.5:1 resulted in the super faster-hearth 283, rated at 220 horsepower. Four Corvette V-8s additionally had been on hand in passenger-auto ranks, the primary two outfitted with twin 4-barrel carburetors. Output was 245 horsepower with hydraulic lifters, 270 with mechanical tappets. At the prime of the record was once Chevy’s legendary fuel-injected Ramjet 283 V-8s, rated at 250 horsepower with hydraulic lifters.

This nomad in the pictures that John Russo Restored at Palm Beach Customs of Florida actually would get 23 miles to the gallon cursing at 70 !

Click here ( but come back to finish the article 🙂

As just right watching as the Nomad wagons were when built, and the rave reviews they got, one could feel they had been a massive sales success. However that was not the case .

In 1957, Chevrolet sold 1,515,177 automobiles, but most effective 6,103 have been Nomads. It wasn’t the styling or efficiency that confined the revenue it was the rate.

The two-door Nomad differed from different station wagons of the generation by having distinctive styling extra paying homage to a hardtop sedan than that of a general station wagon. Chevrolet shared this physique with its sister Pontiac, which marketed their variation because the Pontiac Safari.

The Nomad’s unique design had its roots in a general Motors Motorama exhibit vehicle of the same identify that was once founded on the Corvette. The concept was once presented at the GM Motorama in 1954 as certainly one of Head Stylist Harley Earl’s “dream cars”. It adopted the introduction in 1950 of the Ford country Squire two door station wagons.

GM authorized construction of the auto if the design might be transferred to its general mannequin, on the grounds that prime GM brass felt that they could sell more models if it were connected to the general Bel Air model. In fact, following the product debut in 1955, it was once no longer distinctive for the vehicle to be known as the Chevy “Bel Air Nomad”.

1955 Chevrolets bought all-new styling. Marketed as “The sizzling One,” the boxy new Chevy was crisp, smooth, and utterly ultra-modern-looking. Nomads, like Bel Airs, got here loaded with inside carpet, chrome spears on front fenders, chrome window moldings, and whole wheel covers. For 1955 Chevrolets gained a V8 engine option. The new 265 cubic inches (four,343 cc) cubic-inch V8 featured a contemporary, overhead valve excessive compression, brief stroke design that was once so just right that it remained in production in various types, for a lot of a long time. The bottom V8 had a two-barrel carburetor and was once rated at 162 horsepower (121 kW), and the “vigour p.C.” choice featured a 4-barrel carburetor and other enhancements yielding 180 brake horsepower (one hundred thirty kW). Later within the 12 months, a “super power percent” alternative brought high-compression and yet another 15 brake horsepower (11 kW). It had room for six passengers.[2]

1956 Chevrolets received a face-raise. This gave Chevys a more traditional full-width grille, entertaining those shoppers who failed to just like the Ferrari-stimulated ’55 front finish. Nomads now carried the identical inside and rear-wheel sheet metal as different Bel -Airs lacking the long-establisher’s targeted trim.

Shoulder harnesses, and a padded dashboard were now to be had.

For 1956 Chevys hid the fuel cap at the back of a left facet, flip-down tail gentle.

These so-called “fuelie” automobiles are fairly Rare for the reason that most Bel Airs were fitted with carburation. At the same time regarded to be a milestone car design, general Motors discontinued the fashioned Nomad activity Wagon at the end of the 1957 mannequin yr. due to low revenue and the introduction of a brand new body for 1958.

Hope you enjoyed the Post and another True Story how these cars Chrome and Design still Stand out on the Roads today some 50 plus years later.

Together as a team they are   hard to beat !

Building Dream Rides for the Car lovers all over the State of Florida as well as our nationwide clients and Global Friends..

“Our Clients are not Customers “ They are Family !
https://facebook.Com/PalmBeachCustoms
Get More Restoration Info